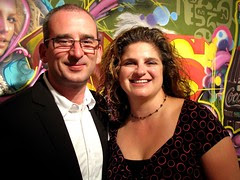 Friend from work tells me she had a dream about me where she comes to my office to talk, but I tell her I'm busy and being really snippy and short with her, telling her to go away. She looks around, sees I'm not writing and not on the computer. And in her dream, she's wondering why I'm being so short with her when she sees something black race from under my desk to under the other desk. That's when she realizes what's going on- she dreamt I was trying to hide three little cats in my office! She said one was white, one black and one calico.
The night she dreamt that may have been the night I saw my sister-in-laws new kittens. Three black and two black and white. I played with all of them- they were all adorable and way too little to leave their mother. 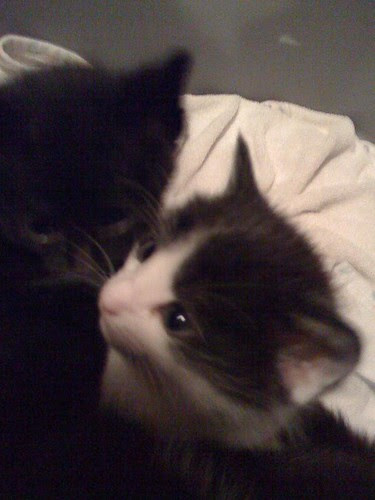 Let's hear it for the boys

Cold, cloudy with copious amounts of...drizzle for Reds Opening Day 2009. But the weather couldn't dampen the enthusiasm of those who braved the weather to help usher the team into the regular season. I used to follow the Indians opening day, but they have nothing on Cincinnati And even though they lost, there's still one hundred and sixty some games left.
My girlfriends and I started the day with muffins & merlot. It was supposed to be kegs & eggs, but alas, no breakfast this year at Game Day. Debbie paid homage to the free hot sauce they were handing out with this little display. 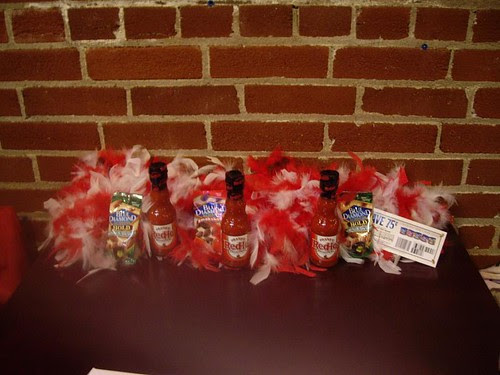 And no opening day would be complete without a picture with Frank Marzullo from Fox 19. 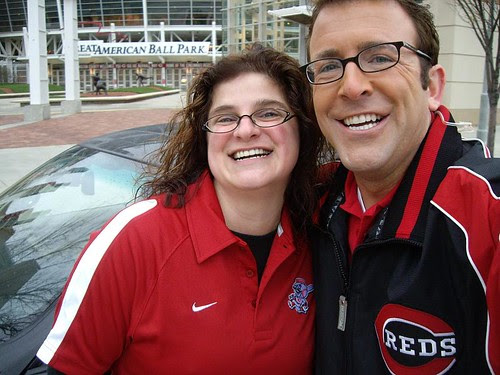 Speaking of Fox 19, I'd like to personally thank them for finally being the media outlet to allot some time to focus on the Cyclones. Cincinnati has a winning, professional team that, even with heading to the playoffs for the second year in a row, are virtually ignored by the media in town. And to get only two paragraphs in Thursday's newspaper is criminal. If you missed the final two regular season games, get down to a playoff game. 5chw4r7z and I excitedly watched them win in overtime last Friday and all I can say is these guys are the real deal!
Posted by Ms5chw4r7z at 9:17 AM No comments: